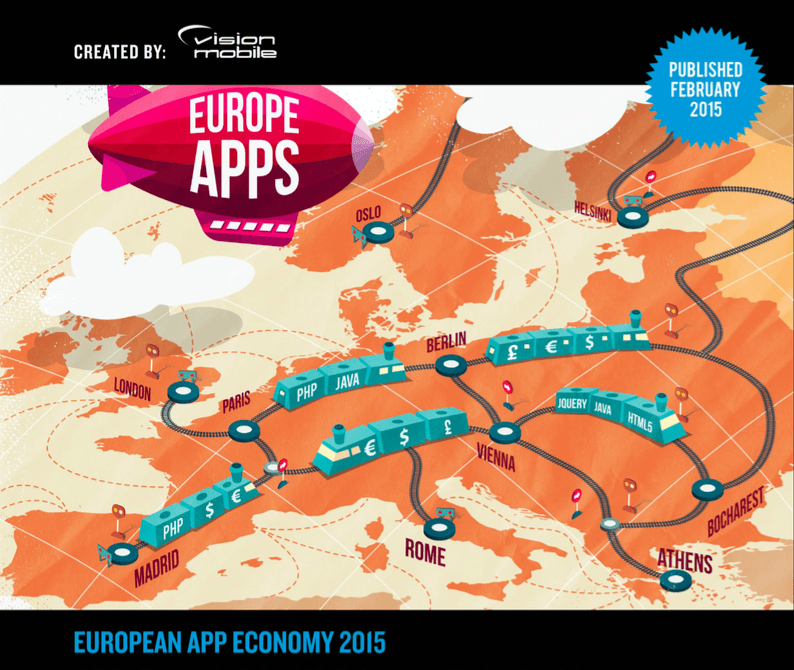 “There’s an app for that” is a tired saying and not entirely true. While there’s almost an app for everything, there are a projected 1 million new app developers this year that will be working on something. I’ll argue that there are many more people who have an idea for an app but who don’t have the dev skills to make it happen. That’s what Appivo is all about. Build your app; no coding required.

The team over at Vision Mobile put together a great report that includes that 1 million projection and a lot more: European App Economy 2015. You can hit the link to read the full report (free). It’s at least worth a skim.

Some of the statements in the report seem like common sense, but so often things are only obvious once someone has said them. Vision Mobile does a good job of concisely summarizing current trends and providing supporting data. And while the report focuses on Europe, it’s easy to see how trends might relate to other regions.

Reading through the report, several things caught my eye and spawned some additional thoughts:

The full Vision Mobile report covers more areas and in more detail, such as potential impact on local economies and revenue comparisons for consumer vs. business apps. This post is not intended to be a summary but rather just an opportunity to highlight a good report and share some thoughts.

Everyone here at Appivo is excited about where the market is headed and we’ve received pretty encouraging feedback from customers, advisors and other colleagues. Reports like this one help validate our strategy though I’m sure there are some who may disagree or offer alternative opinions. Feel free to leave a comment below if you have anything to share.